“When I make a wish before I go to bed, why doesn’t it come true in the morning?”

It was a week before his fourth birthday when he posed the question. My mind started racing through all of the possible things he could be wishing for. Was it something I could make come true for him? Some silly toy he wanted? Or was he wishing for things that were out of both his reach and mine?

I have recently started stepping back to consider my own beliefs in an attempt to untangle a ball of thread that started winding before I could even think for myself. As someone who has known the beauty of simple belief in an all-powerful force that operates in the realm of impossibilities made possible, and as someone who has also experienced the sucker-punch of reality, I looked at my innocent son and wished he had someone wiser than I to talk to. 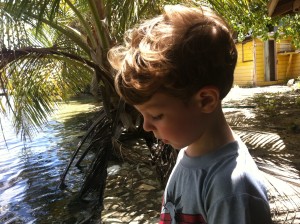 I thought that having a child in my thirties would mean I would be more equipped for motherhood. I would be settled, more mature, and definitely wiser from life experience. I didn’t realize that life experience would make it difficult to answer my child’s questions without taking away his childish sense of wonder that he is entitled to.

So when he asked why wishes don’t come true, I was torn between wanting him to be empowered by the belief that anything is possible and wanting him to be prepared for the inevitable truth that even wishes that should come true sometimes, even most times, don’t.

I looked in his eyes, and tried to pull my thoughts together.

“What have you been wishing for?”

In all seriousness, he replied, “For five nights I have wished that when I wake up my arms and legs would be stretchy so I can reach out and help people in trouble.”

Oh God! It was priceless, beautiful and sweetly funny all at the same time. I later found out that this scenario actually happens in Animal Mechanicals, Season Two, Episode Eleven.

So, I didn’t tell him that life is made up moments that are mostly a result of cause and effect.

I didn’t tell him that it rains on the just and the unjust and sometimes those moments are so magical you will swear that your prayer was heard and directly answered.

I didn’t tell him that some days you will yell out questions to the skies and look to the left and the right but feel utterly forsaken.

Because what is life without a sense of hope?

I gave him a partial answer.

I told him how awesome his wish was and how proud I was that he wanted to become something in order to help other people.

I told him that sometimes wishes do come true but that they usually have to be something that is a possibility in the first place.  So even though his arms and legs will probably never develop a super-stretchy power, he may very well become bigger and stronger someday and be able to help people.

It wasn’t a perfect answer, but my hope is that I can continue to answer his question, not so much with words but with my response to life.

I want him to join me in the wonder that is our universe and what we call living here on Earth. I want to be present in the small moments that I can help make magical for him. We will dance in the kitchen and sing songs at the top our lungs. We will watch the sunset and wonder over the complexity of a leaf.

Because life is made up of both kinds of moments and being able to believe in and celebrate the unbelievably great moments will help him get through all the rest.