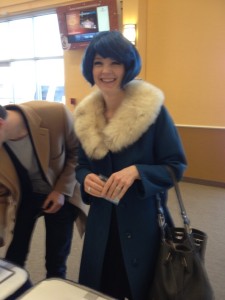 To kick off the 2013 Calgary Auto Show this week, Ford Canada threw a party–A Blue Party.  The invite said to wear your best blue outfit so I did the only thing a normal person would do, I bought a blue wig and had Rae-Anne Pyett, from the Mac counter at The Bay Market Mall, help me out with some spectacular blue eyeshadow.

At the Blue Party, Ford unveiled their 2013 Focus, Fusion, Escape, and F-150 and while they are all elegant vehicles, my favorite is still the Ford Escape.  You can check out these cars and more this week at the BMO Center.   The Ford exhibit will feature the Alberta premiere of the 2014 Ford Fiesta, and the Lincoln MKZ, and the MKZ Hybrid.  Also at the show will be the 2013 AJAC award winning Ford Escape, Ford Fusion Hybrid, Ford Focus EV and the Focus ST.  With 2012 proving to be another industry leading year in Canada for Ford, the best-selling F-Series range of trucks will be on display with an impressive lineup of Electric and Hybrid vehicles that include the fuel-efficient CMAX Energi and the Fusion Hybrid.  You’ll also have the opportunity to see and learn more about Ford’s series of award-winning EcoBoost engines.  The 2013 full Mustang lineup will also be featured, in addition to a range of Ford technology including My Ford Touch hands on demonstrations.

Yesterday, Max and I went to see Hank the talking Robot who is powered by Ford.  I’m wasn’t sure that Max would be brave enough to talk to him but he loved Hank and talked about him for the rest of the day.  You should really take your kids down to talk to Hank and while you are there you can hop in a few vehicles and breathe in deeply that new car smell.  It’s therapeutic, wouldn’t you agree?

Here is a link for more details: 2013 Calgary Auto Show

Will you be taking your family to the show?

Coming Soon on Life Where We Are: